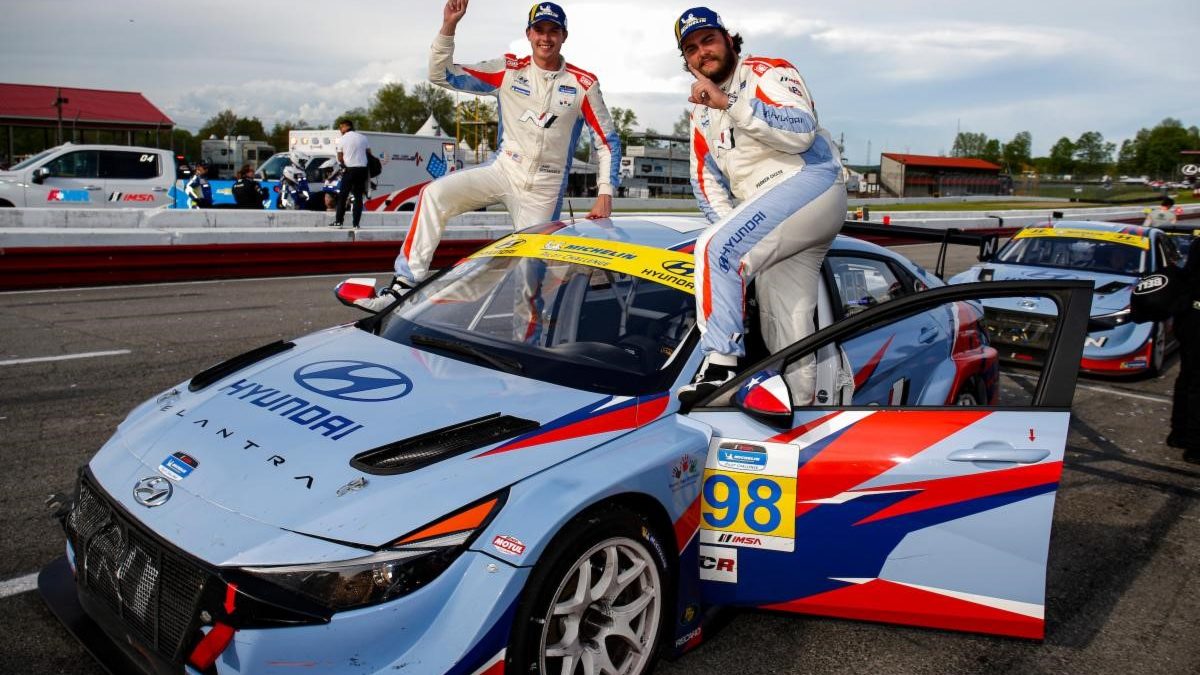 Harry Gottsacker and Parker Chase, drivers of the #98 Elantra N TCR won the Mid-Ohio 120 on Saturday. It was a back-to-back victory at Mid-Ohio for Chase, and his second career TCR victory. Chase qualified and started the race in fourth, Gottsacker took over mid-way and raced to the checkers. Gottsacker typically qualifies and starts the race, known as a master qualifier, he recently broke the series record for pole positions. Although it was his fifth TCR victory, it was Gottsackers first time taking the checkers from the drivers’ seat.

The victory was the third for Bryan Herta Autosport (BHA) and Hyundai at Mid-Ohio, the first win for BHA and Hyundai since Laguna Seca 2021, and 15th victory for BHA since joining the IMSA Michelin Pilot Challenge in 2019.

Until the final five minutes it looked like BHA might be poised for all six team entries finishing in the top eight positions. Misfortunes struck in the closing laps relegating Ryan Norman in the #2 Elantra N TCR from second to ninth, Tyler Maxson in the #77 Veloster N TCR from fourth to eighth and Robert Wickens in the #33 Elantra N TCR from fifth to 11th. The #54 Elantra N TCR of Michael Johnson and Stephen Simpson ran strong early, but two pitlane speed violations forced them to the back of the field, Simpson tallied a seventh-place finish, their fourth consecutive top-ten result this season.

Harry Gottsacker: “This win feels so good. Parker started today and killed it out there. We had great pitstops, the BHA boys and girls were so good in the pits today and that Elantra was fast as heck out there all weekend. That is what it takes to win in this series…need to nail everything.”

Parker Chase: “Great to get a back-to-back win here at Mid-Ohio, this might be my new favorite racetrack! We’ve made consistent small changes to the car every weekend and it is better and better each time. I’m really happy with our race today, it was nerve-wracking, but exciting watching Harry out there at the end, congrats to him and good job to the 98 team.”