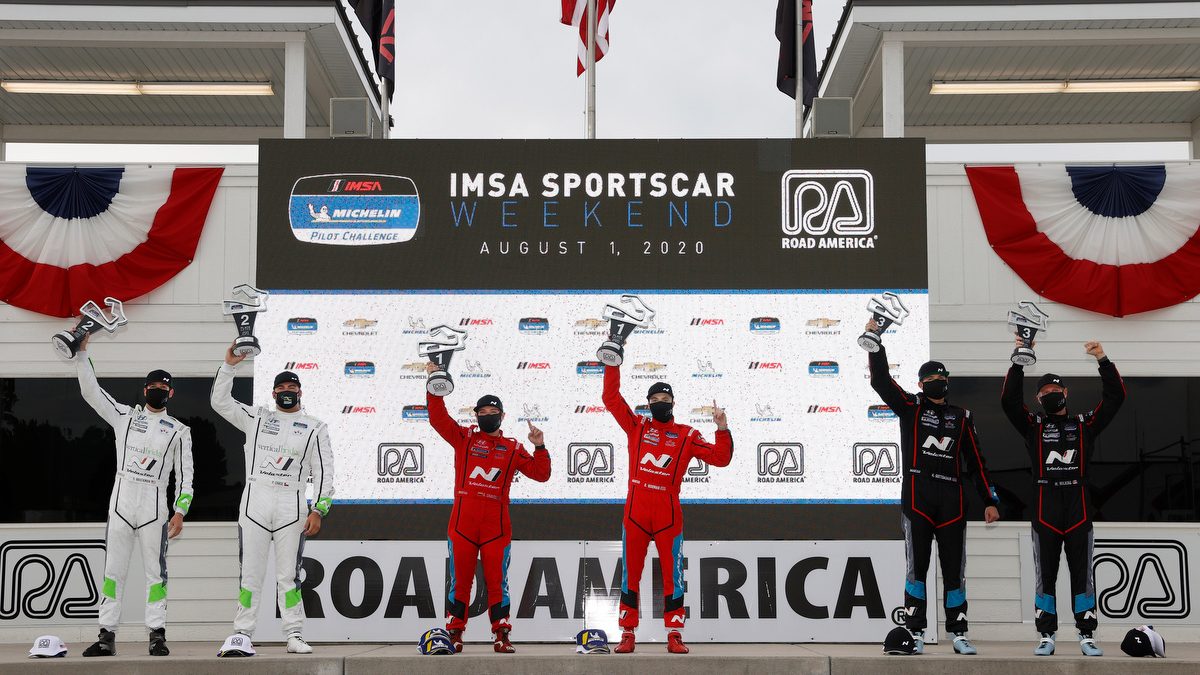 It was an all Hyundai podium again this weekend at Road America in Elkhart Lake, Wisconsin, with Bryan Herta Autosport earning their second consecutive race win since returning to competition earlier this month. Hyundai now leads the IMSA Michelin Pilot Challenge (IMPC) Manufacturers championship by five points over Audi.

This time, it was the BHA newcomers who led the way with Gabby Chaves and Ryan Norman scoring their first victory in the #33 Hyundai Veloster N TCR and Parker Chase and Spencer Brockman finishing second in as many starts in the #29 Vertical Bridge Veloster N TCR. Sebring winners Harry Gottsacker and Mark Wilkins completed the podium with their third-place finish and extended their lead in the championship points standings.

Having led each of the first three races in the 2020 IMPC championship, Ryan Norman and Gabby Chaves prevailed to score their first victory at Road America. Ryan Norman took the lead on lap 3, and the duo never looked back. The two-hour race was caution free for the first 116 minutes and the race pace was frantic. Norman, Chaves and the entire #33 BHA crew executed flawlessly to secure the win. They jumped from seventh to second in the championship standings.

Spencer Brockman and Parker Chase made their IMPC TCR debut with BHA just two weeks ago at Sebring. The #33 Vertical Bridge Veloster N TCR was the fastest Hyundai in qualifying on Saturday at Road America, with Rookie Spencer Brockman behind the wheel; he started fourth. Brockman took advantage of the green flag when he charged to the race lead by the second lap. He had an exciting battle with teammate and eventual race winner Ryan Norman for the lead a short time later. Brockman pitted from second and turned the car over to co-driver Parker Chase. Chase defended the position with fast, consistent laps to finish second, scoring their first podium in just their second IMSA Michelin Pilot Challenge race.

Coming off their second-place finish at Sebring, Mason Filippi and Michael Lewis had high hopes for another podium at Road America. It wasn’t their day, electrical gremlins prevailed, and their race was cut short. They are tied for third in the championship standings just 10 points out of the lead.

The next round of IMPC competition is set for August 22 at Virginia International Raceway.

Spencer Brockman: “It was an awesome weekend overall for the #29 Vertical Bridge Hyundai Veloster and the Bryan Herta Autosport squad. It feels great to get our first IMSA podium so soon and I can’t thank everyone enough here at Bryan Herta Autosport and at Hyundai. I’m really looking forward to VIR!”

Parker Chase: “It was a really great for Spencer and I. Finishing on the podium in just our second race with the BHA in the Vertical Bridge/Hyundai Veloster N TCR car is a great accomplishment. After a tough race at Sebring, it felt great to rebound and show our potential. I’m really happy with the hard work the BHA crew put in to this effort, they gave us a phenomenal race car.”

Mark Wilkins: “What an incredible weekend again for Hyundai! Congratulations to Ryan and Gabby as well as Spencer and Parker on their awesome results! Harry ran a great stint and kept the car in a position for us to extend our championship lead. We’re early in the season but it’s nice to lead going into VIR. It was a great weekend for BHA and Hyundai and a huge thanks to our awesome crew for all of their hard work.”

Harry Gottsacker: “Road America has been good to me the last two years. It’s a very special place for me, I’ve got a lot of family here and I am so glad to give them something to celebrate. Wow, what a great couple of races for Mark and I. I really enjoy working and driving with him and I guess that shows. We’re on a roll and it’s exciting to take our #21 Hyundai Veloster N TCR to VIR with a healthy points lead.”