It’s a Three-Peat, BHA Hyundai is Victorious at VIR

It’s a Three-Peat, BHA Hyundai is Victorious at VIR 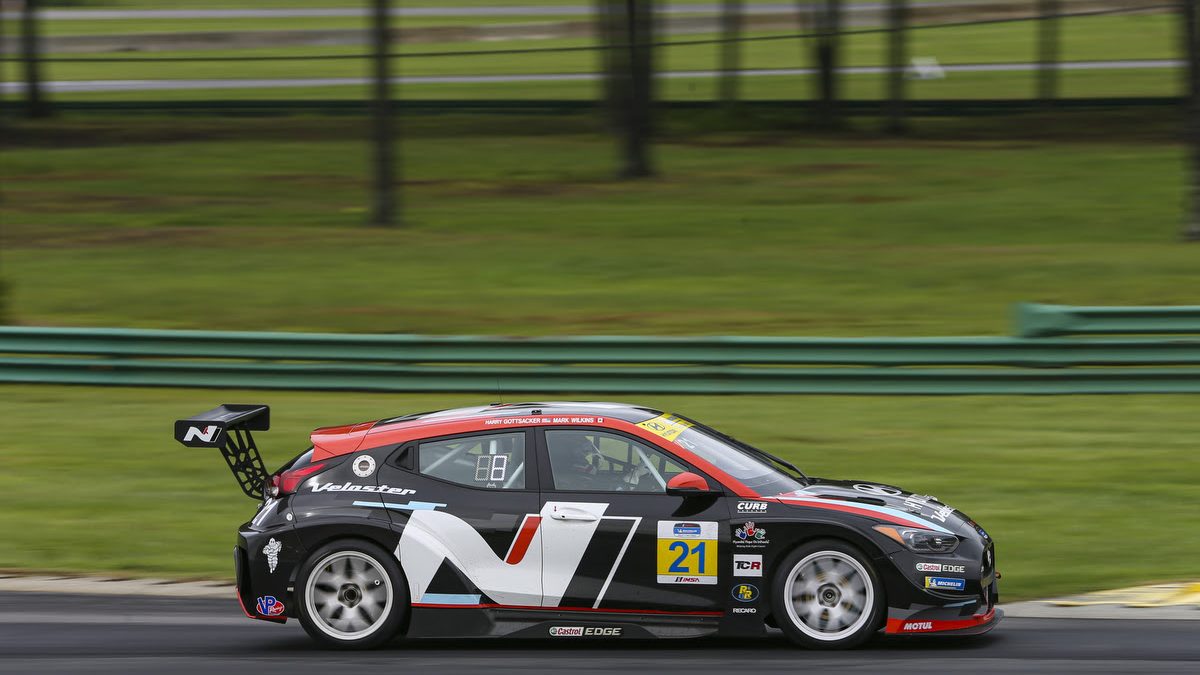 Mason Filippi and Michael Lewis yesterday earned their first victory of the 2020 IMSA Michelin Pilot Challenge season, driving the #98 Hyundai Veloster N TCR at Virginia International Raceway. This is their first race win as teammates. Lewis preserved his tires and saved fuel through the first half of the race, which helped the #98 team jump to first in a lightening quick pit stop, including the driver change. Typically, the race starter, Filippi took over for the finish. His mirrors were full of fellow BHA Velosters challenging for the win. Filippi’s finesse allowed him to charge to the checkers for the victory.

Harry Gottsacker and Mark Wilkins finished second in the #21 Hyundai Veloster N TCR and extended their points lead by 11 over Filippi and Lewis. Wilkins and Gottsacker have finished on the podium the last three races. It started with their victory at Sebring, followed by third place at Road America and then second yesterday at VIR.

In just their third race together driving the #29 Vertical Bridge Hyundai N TCR, Spencer Brockman and Parker Chase scored their second podium finish with a phenomenal drive from 10th to third.  Brockman recovered from an early race tangle to fourth before turning the driving duties over to Parker Chase. Chase had an exciting multi-lap battle with Stephen Simpson in the Audi for third and prevailed, finishing third.

Gabby Chaves and Ryan Norman have led every race this season. This time it was Gabby Chaves who qualified and started the race. He passed to the front and led throughout his stint. The #33 car lost positions in the pits and Norman struggled with handling in the second half of the two-hour race. The #33 Veloster N TCR fell back as far as ninth, but Norman raced back to a top-five finish.

Round five, the halfway point of the 2020 season, takes place at Michelin Raceway Road Atlanta over Labor Day weekend, September 4-6, 2020.

Mark Wilkins: “Fantastic day today for Hyundai and our quest for the Manufacturers championship today. It really couldn’t have gone any better, another sweep for BHA and the team is just doing such a great job, they give us a great car and Hyundai gives us a great platform. It’s awesome, there is great synergy within the team, everyone is firing on all cylinders and these are the results when that happens. Great job again by Harry qualifying and in the first stint, and by our engineer Hunter (Wright), who has been nailing it the strategy and set-ups. I can’t wait to keep the party going at Michelin Raceway Road Atlanta in a few weeks.”

Harry Gottsacker: “It was another solid race and points day for Mark and me in the #21 Hyundai Veloster TCR. Man, I’m having a blast. The team gave us a really good car and I was able to quickly get to third in the first few laps. We had a great stop by the BHA boys and Mark gave the typical Mark Wilkins performance. He was smoothly hunting down Mason for the win and ran in his shadow the entire stint. Congratulations to the team and Hyundai on another sweep and It’s nice to head to Road Atlanta with a bit of padding in our Championship lead.”