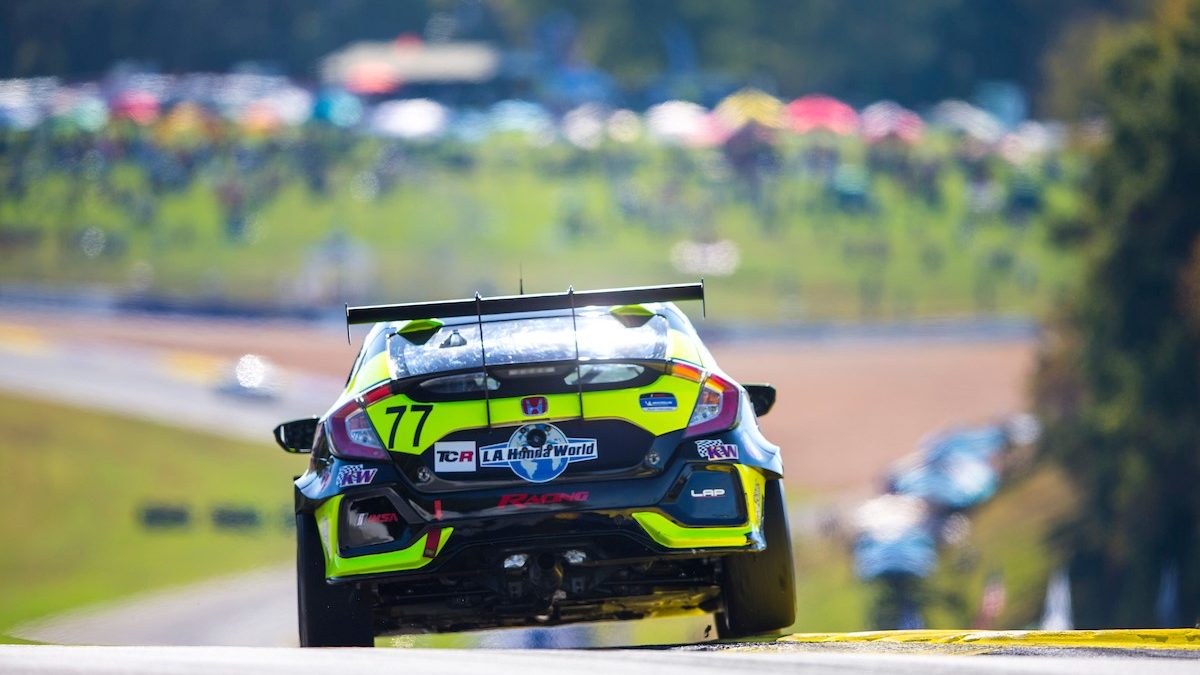 The duo methodologically maneuvered through the two-hour race which was repeatedly slowed by caution periods, which consumed nearly half of the running time.

Between the safety car runs, some precise and heads up driving from the pair saw the No. 77 L.A. Honda World Racing Honda Civic Type R TCR close out the race in the top five for the third time this season, having led late in the race.

Hagler took the green flag from eighth and maintained her position through the first eight laps as the combined field of GS and TCR cars settled into race pace. Using lessons learned from her previous outing at Road Atlanta just one month prior, Hagler was able to quickly move up to seventh position before the first full course caution arrived on lap nine.

While under yellow, Hagler managed her fuel consumption to open up the strategy window when racing resumed. On the restart, the 25-year-old showed patience in nose-to-tail traffic looking for an opportunity to make a pass as she raced in seventh. More forward progress was stalled just five laps later as the second full course caution was deployed. Under yellow, Hagler handed the car off to Eversley who took the second restart from ninth.

Going back to green flag racing on Lap 25, Eversley began working through traffic lap by lap, ultimately racing to the lead of the TCR field – the second race in a row to see the No. 77 Honda lead laps. A third caution on lap 42 was less than ideal for the team’s strategy and forced Eversley to pit out of sequence under yellow. Re-entering the 2.54-mile course, Eversley took the third restart of the race from eighth where he again showed his prowess and worked his way to fifth.

The Fox Factory 120 came down to a five-lap shootout to the checkered flag after a fourth and final caution packed the field back up. Eversley brought home the No. 77 L.A. Honda World Racing Honda Civic Type R TCR in fifth which marked Hagler and Eversley’s second top-five finish at Road Atlanta this season.

Continuing to make positive strides, the result is the third top-five for Hagler in her debut IMSA season.

“The caution periods helped my mindset today and forced me to take a moment to reset and to focus,” said Hagler. “L.A. Honda World Racing gave us a phenomenal car this weekend. Starting from eighth I had to keep patient while working my way through traffic. The No. 77 Honda Civic had great rotation where I could put the power down through the corners to make passes. Overall it was a productive weekend. While it would have been nice to get another podium finish, we will take the top five with us and focus ahead to Laguna Seca.”

“Taylor (Hagler) did a fantastic job during her stint,” said teammate Eversley. “She got both sets of new tires this weekend and made changes that helped her utilize the conditions which she was racing in. The No. 77 L.A. Honda World Honda Civic Type R TCR was the best car we have had all year long. That showed as we were able to get to the lead two races in a row. Unfortunately, the last yellow came out, so we were cycled back to eighth. The big thing we are focused on this season is Taylor’s development. She is a force to reckon with and was one of the fastest Hondas all weekend. All I could ask for in a teammate is someone who is quick and has great pit stops and she is exactly that. It’s bittersweet to not get a podium.”