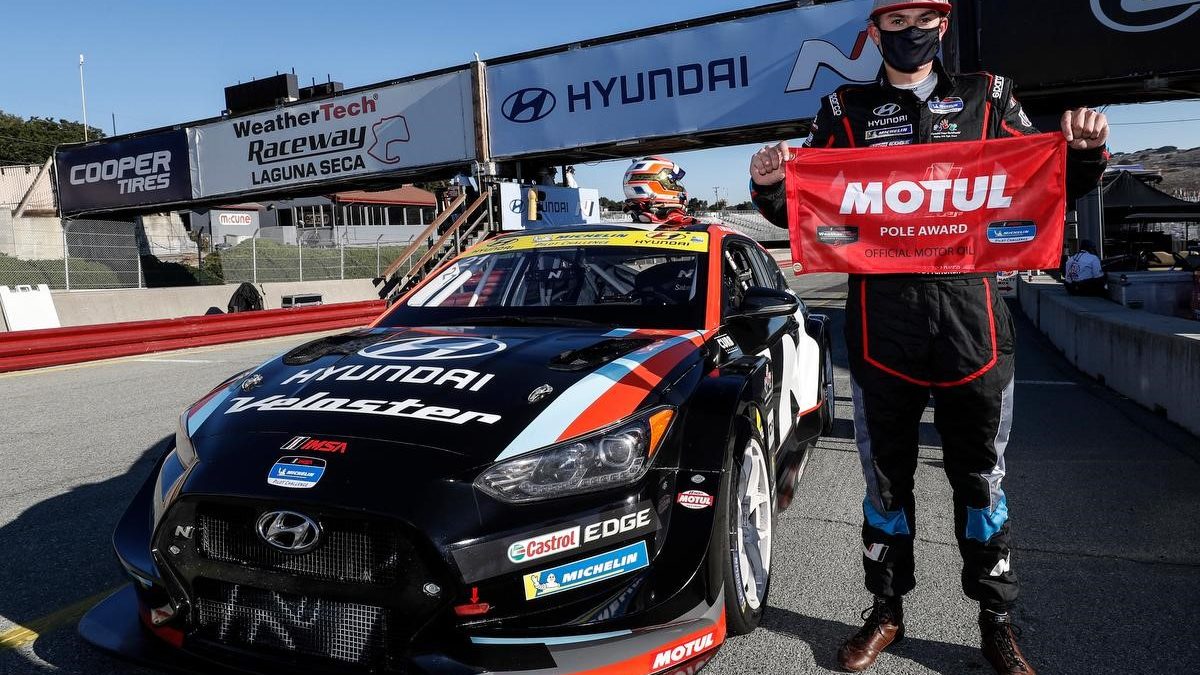 The stakes were high and the championship battles tight as the penultimate round of the 2020 IMSA Michelin Pilot Challenge rolled into the inaugural Hyundai Monterey Sports Car Championship at WeatherTech Raceway Laguna Seca. Known for its topography and challenging corners like the Andretti Hairpin and the famous “Corkscrew”, Laguna Seca always presents action-packed racing and this weekend’s IMSA Michelin Pilot Challenge race did not disappoint.

Under sunny skies and cool temperatures, the field roared to life as Hyundai’s Erik Thomas gave IMSA drivers the command to start their engines. The all-Hyundai TCR front row featured Harry Gottsacker on pole in the #21 Veloster N TCR alongside teammate Mason Filippi in the #98. Ryan Norman started 3rd in the #33. Spencer Brockman started last in the #29 Vertical Bridge Veloster N TCR due to a strategy change to start with four fresh tires rather than the Michelin rubber he qualified on.

All 12 rows of the world’s best-known brands perfectly aligned for Hyundai’s Paul Imhoff to wave the green flag, signifying the start of the 2-hour challenge. Unbelievable drama unfolded from the Andretti Hairpin at turn two as the off-pace GS car created havoc for the TCR front row, specifically, Gottsacker, Norman and Filippi. As Norman braked to avoid the GS car, he made contact with BHA sister car, Harry Gottsacker in the #21 Hyundai Veloster N TCR. With zero visibility and no where to go, championship points leader Mason Filippi was collected in the melee.  The #33 Veloster N TCR suffered only cosmetic damage and Norman moved to the lead. Both he #21 and the #98 Velosters were forced to return to the garage to assess their damage. The strategy call paid off for Brockman, as he started from the back and was able to avoid the calamity, he shot through the field to third position.

The BHA crews worked frantically to repair the damaged Velosters in time to return to competition. With the championship quickly winding down, points paying positions are more critical than ever. It was quickly determined the 98 was damaged beyond repair for a return to competition. The 98 crew turned their efforts to assist the 21 crew. Still belted into the car, Gottsacker anxiously awaited while the crews changed the steering rack, right rear suspension, and damper in remarkable time. The #21 returned to the track and competition. Soon after Mark Wilkins took over and brought the #21 Veloster home in 7th position, scoring 24 championship points.

Norman and Brockman’s race continued with rapid pace. Brockman, who was racing at the famed Laguna Seca circuit for the first time, led 15 laps in the first half of the race. The #29 Vertical Bridge team made just one pitstop, and in 1 minute 14 seconds completed the driver and tire changes and fuel. Chase hit the track with 54 minutes remaining and finished third, another strong result, their fourth podium finish of the season.

The team pitted out of sequence from the lead on lap 12 and took four tires and fuel. The long stop early would establish a shorter stop later and allow Norman to race hard with fresh tires on all four corners. Norman set the second fastest TCR lap of the race and stormed back to the lead by lap 28. The #33 pitted for its final stop and driver change with 52 minutes remaining. Shaving the gap by nearly a second each lap, Chaves hunted down the leading Audi and made a courageous pass for the win in the Corkscrew, a twisty section that drops 5 ½ stories in just 450 feet. The win was the third this season for Chaves and Norman, and they move into the championship lead (257) with four points over the #98 team of Michael Lewis and Mason Filippi (253).

The season concludes Friday, November 13th at Sebring International Raceway. Bryan Herta Autosport’s victory at the Hyundai Monterey Sports Car Championship represents the sixth win of the season for Hyundai. Hyundai leads the manufacturers championship by 17 points with one race to go.