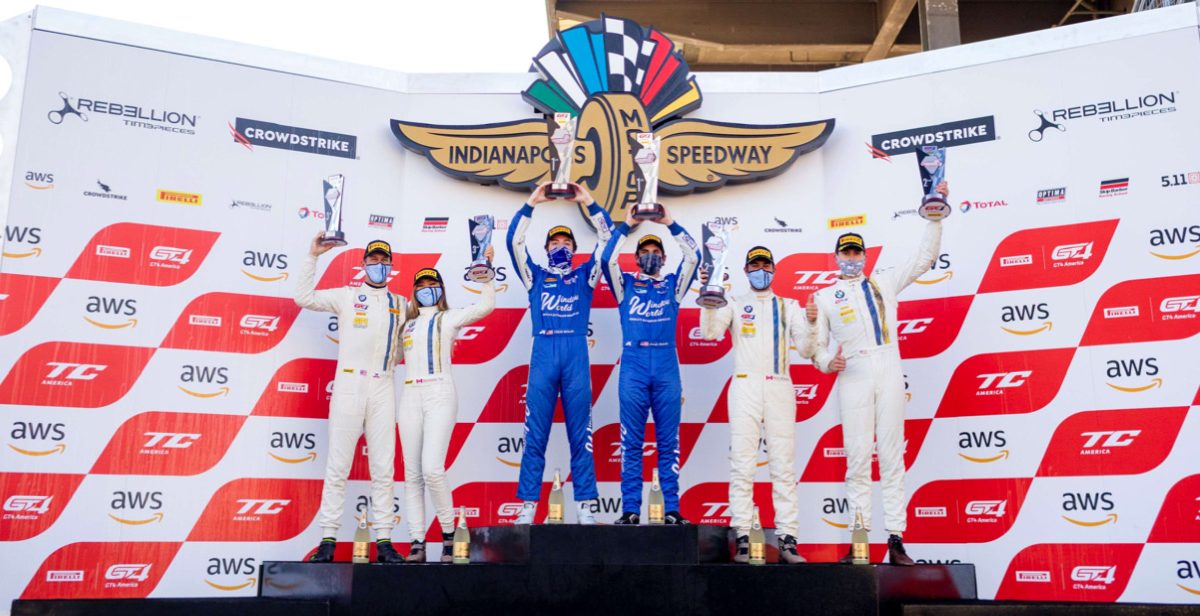 This was ST Racing’s first visit to the Indianapolis Motor Speedway as they competed in the season finale double-header of the Pirelli GT4 America SprintX Championship. And what better place than this world-renowned track to conclude the season with three podiums, a Team Championship, and a run in the Intercontinental 8-Hour GT Challenge Powered by Pirelli.

Canadian driver Samantha Tan was elated to be at the Brickyard. “It is definitely awesome to be driving on such a legendary track” she said. “This track is fun, we have a strong car, and I’m excited to be running in both the Pirelli GT4 America Championship and the Indy 8-Hour.”

Once again, ST Racing enjoyed the assistance of three technicians from the BMW Shop Foremen Race Crew Program. Their help and hard work throughout the weekend were really appreciated by all.

On Thursday afternoon, Nick Wittmer and Jon Miller started the first race of the weekend sitting 2nd and 3rd respectively on the grid, with Jarrett Andretti sitting in 4th. Needless to say, with Andretti leading the Championship by only two points ahead of ST Racing, it was written in the sky that it was going to be a crazy race.

As soon as the green flag flew, Andretti charged to the front and got into a battle with race leader Matt Travis, spinning Travis to the back of the field. Miller and Wittmer inherited the lead, and Andretti was issued a drive-thru penalty. At the same time, contact between cars #26 (Hull) and #33 (Dalton) at Turn 12 caused a full-course caution. Andretti drove into the pits to serve his penalty, and rejoined the 24-car field hoping to take advantage of the caution flag to gain some time and eventually charge back to the front.

On the re-start, Wittmer held on to the lead with teammate Miller driving hard as his wingman in his #38 BMW M4 GT4, keeping the pack behind them. At half-time, Wittmer came into the pits to hand over his #28 BMW M4 GT4 machine to co-driver Harry Gottsacker. The young Texan put on his best drive of the year, holding off Andretti’s teammate (Mullan) who’d managed to make his way up to 5th. Gottsacker secured 3rd place overall, and 2nd in class putting the Wittmer/Gottsacker duo back in the Championship lead, by one point.

“It feels great to start the weekend with a podium in P2 at the Indianapolis Motor Speedway” said Gottsacker. “ST Racing gave us a great car, and we had a battle for the win, the last 5 laps. Most importantly, we took over the Championship lead going into the final race tomorrow. The team will work hard tonight to give us a great car to go for it all tomorrow.”Nick Wittmer’s smiled as he said: “It was an amazing race. We got through to the lead, and just kept it clean. One point in the lead now. It comes down to the last race. Whoever finishes first tomorrow, wins the Championship.”

When Miller entered the pits for driver change, Samantha Tan jumped in and drove consistently while doing her best to respect her Pirelli P-Zero’s and crossed the finish line 6thin class.“It was a nerve-wracking race for me” said Tan. “Jon (Miller) and I started on quali tires to save the sticker set for the final race. At the start of the race, the Andretti McLaren hit Travis’ Porsche. Andretti got a drive-thru penalty, but they waited to throw the full-course caution

until Andretti went into the pits. Jon drove well and I hopped in the car trying to maximize the performance of our almost race-distance tires. I had a bit of a bump with the #17 Porsche, but it was all good. We finished with some points. We start on stickers tomorrow, and hope to help Harry and Nick win the Championship.”

Miller added: “The start of the race was eventful. I went from 3rd, to 4th, and up to the lead before the first lap was over. We’re focused on the Championship points situation with our #28 car this weekend, so I was keeping that in mind. Nick (Wittmer) and I were running 1-2 and started to build a gap, but the cautions broke up the rhythm of the race. I’m glad Nick/Harry finished well today. Same plan for tomorrow.”

Nick Wittmer recorded the Fastest Lap of the race in Silver class at 1:31.670.

Although all four ST Racing drivers had great stints moving up the field, the #28 BMW GPI Biotech machine of driving duo Nick Wittmer / Harry Gottsacker just missed finishing ahead of the #36 Andretti car by a mere few seconds, resulting in the Driver Championship slipping away from them.

Tan and Gottsacker took the green flag for this final race of the season. Halfway through her stint, Tan started experiencing pain in her left braking leg during a full- course yellow. “The start was pretty good” said Tan. “I had a good battle with Toby Grahovec (Classic BMW #26). Unfortunately, my left leg gave out, and I had to switch to my right leg. I did my best to keep up with the pack until I handed the car off to Jon. He drove amazingly well, as always, and put our car 3rd in class, which I’m pretty sure gave us 3rd place in the Driver Championship. I’m really happy with Jon’s performance this season. However, I think Nick and Harry should have won the Driver Championship. But we did get the Team Championship, and I’m proud of our accomplishments.”

Team Principal Kenneth Tan stated he was happy with the overall weekend, but not ecstatic. “I’m proud of our Team” he said. “We missed the Driver Championship by 2 seconds and the officiating decisions tilted the chances toward the Andretti Team. On the other hand, car #38 took P3 in the Driver Championship and that was satisfying. Jon and Sam drove a hell of a race today. So did Nick and Harry, but the odds were stacked against them.”

For the second year in a row, ST Racing clinched the Team Championship in the Silver Class. Duo Nick Wittmer / Harry Gottsacker secured 2nd place in the Championship, with Samantha Tan / Jon Miller right behind them, in 3rd place. All in all, a great season for ST Racing.

However, celebrating would have to wait, as the Team had to prepare for the next day’s sessions leading up to Sunday’s Intercontinental 8-Hour GT Challenge Powered by Pirelli.

The GT4 America championship utilizes GT4 homologated race cars in two popular race formats – Sprint and SprintX. The past season has seen explosive growth in the GT4 category and has resulted in a wide range of cars that are eligible to race in the GT4 America Series, including the BMW M4 GT4, Chevy Camaro GT4.R, Audi R8 LMS GT4, Ford Mustang GT4, and the Mercedes-AMG GT4. Among other GT4-spec cars are the successful Porsche Cayman GT4 CSMR, McLaren 570S GT4, Panoz Avezzano GT4, and many others.

GT4 America offers two regional series integrated within our SprintX Championship -West & East. Each regional series is designed to offer new drivers a localized race program that is cost effective and competitive, with all the benefits of racing in a professional national championship. Each region will consist of five (5) rounds at top-tier circuits in North America in a two-driver, Bronze-rated format.

With more than 25 years’ experience at the forefront of a continuously evolving industry, SRO Motorsports Group is the established international leader in GT racing. Best known for the development and implementation of the GT3 and GT4 regulations, SRO promotes and organises championships that embrace professional and amateur competitors. Its portfolio of highly regarded series spans Europe, America and Asia, while its flagship Intercontinental GT Challenge features events on five different continents.