ST RACING HOLDS ON TO CHAMPIONSHIP LEAD AT SONOMA

ST RACING HOLDS ON TO CHAMPIONSHIP LEAD AT SONOMA 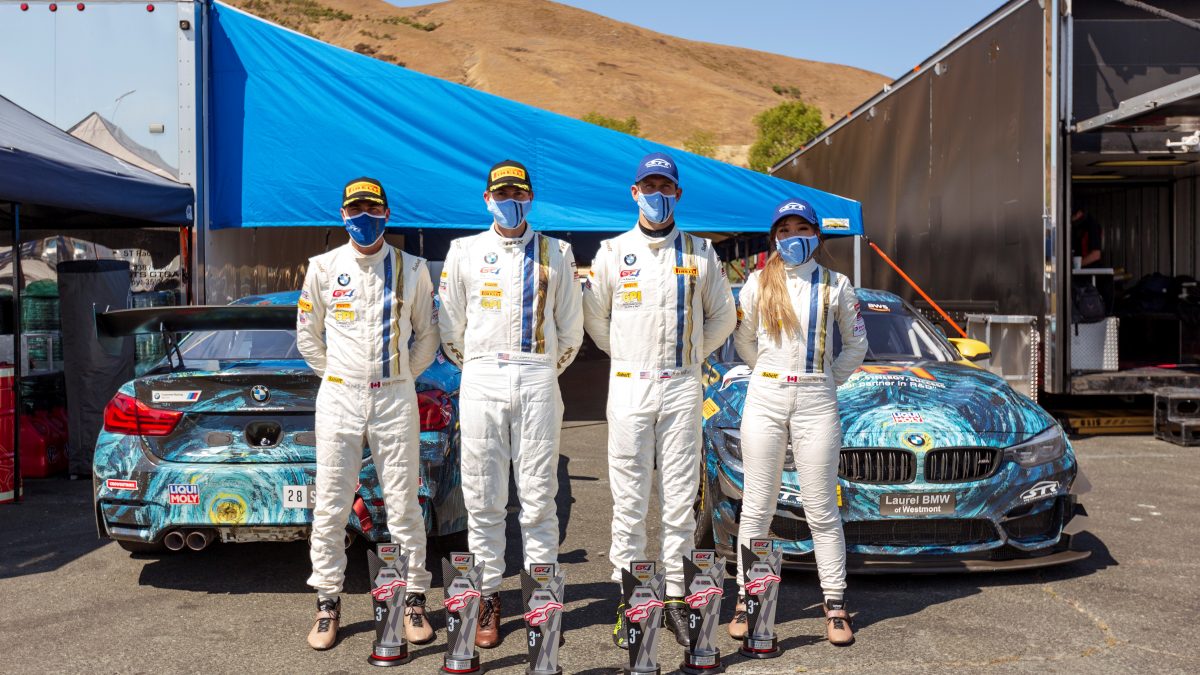 This past weekend, ST Racing headed out to Northern California’s beautiful Wine Country for Rounds 6-7-8 of the Pirelli GT4 America SprintX Championship at Sonoma Raceway taking away three podiums while securing their Championship lead in the Silver Division.

The Sonoma 2.5-mile circuit is known as a technical track with elevation change, not always easy to drive, as it lacks grip and has some blind spots. “The thing about this track” said ST Racing’s Nick Wittmer, “is that it changes every 10 minutes, so we have to treat it like a “rain track” and keep adapting”.

In Friday’s qualifying, all four ST Racing drivers quickly realized that this weekend’s triple-header was all about monitoring tire degradation especially for the heavier cars on track.

Once again, the Team was graced with the precious contribution of BMW’s STEP Program technicians. “These BMW guys make such a difference here with their knowledge and experience with these cars” stated Crew Chief Ben Distaulo. “We really appreciate their help and they’re fun to have around”.

Samantha Tan’s co-driver Jon Miller went out first and wasted no time in recording the fastest lap time of the race.

“It was awesome to get the Crowdstrike Fastest Lap of the Race for the Team”, said Miller. “And, great having the BMW STEP Program guys helping us out this weekend. Made all our lives much easier this weekend. They know these cars inside and out, in terms of tuning the cars, finding speed and setting them up in between every session, realigning them, checking everything, making sure they’re perfect and ready to go. As for our results, this track doesn’t suit our car, plain and simple. We’re just happy that we came away with some points and a solid 5th place finish.”

At half-time, when Samantha Tan jumped into the car, there was a bit of a mishap. Her cool shirt got stuck in the belts causing her to lose some precious time and positions.

“When I went out, my belts weren’t done, so I was fumbling with it on my first lap out” said Tan. When our sister car (#28 BMW M4 GT4) caught up to me, I tried to brake early going into the chicane but there was a lot less grip than I expected, and I went straight into the dirt, and had to cut the corner a little. I was a bit frustrated about that. I tried to do the best I could with tire degradation. Still, we got some solid points in the bank for the Championship.”

“It’s a great way to start off the weekend with a podium finish” said Gottsacker. “Our BMW M4 GT4 was a rocket ship the whole entire time. Definitely a bit tricky track conditions for us this weekend. It’s a tight technical track but I’m glad we were able to score some good points. The track always seems to be really greasy and even though the rubber gets laid down, the sand just keeps covering it.”

Wittmer added: “Harry did an amazing job keeping the car together, passing many cars. The BMW’s are not number one here but we did our best. The last 2-3 laps, the rear tires were starting to go away, but with the points we got, we managed to keep the Championship lead by one point ahead of Andretti Team.”

There was frustration in Wittmer’s comment after the race. “On the start” he said, “I couldn’t get the inside line, got caught on the outside for the next 2-3 corners. Andretti passed me, and all I could do was follow him. I battled with him, but he just wouldn’t move out of the way. He blocked everywhere. I did my best. I was waiting for him to make a mistake so I could pass him. I had to play the waiting game. Harry did well also. We’re now 2nd in the Championship, just 5 points behind Andretti.”

Samantha Tan had a great start right from the get go and gained a few positions in the very first laps and battled with Toby Grahovec (Classic BMW # 26), but half-way through her stint, a full-course caution caused her to lose the gap she had managed to get. When the pit window opened, she handed the car over to her co-driver, Jon Miller, who showed some fabulous racing skills and started moving up the 25-car field, ending the race 7th overall, but 3rd in Silver class.

“The car was really good even at the end of the race” said Miller. “Last year we were struggling at this track and we’re still not super happy with our performance at this place but we made tons of strides in the car and it held on better than we expected. I was really able to charge and gain some positions, and get a podium. Bittersweet that I had to take it away from my teammate (Gottsacker) but happy to bring home a trophy for Samantha and I.”

Round 8 (Make-up race for Lime Rock)

At 9:30 on Sunday morning, the GT4 America cars went racing again, in perfect weather conditions. With the abrasiveness of the track taking its toll on the Pirelli P Zero tires, the name of the game again was managing tire degradation. However, the ST Racing drivers were determined to do well for Samantha Tan as this was her birthday.

Tan started the race on old tires from qualifying and did her best to stay with the pack while saving some tire for Jon, but lost a bit of time when she got pushed to the outside in the hairpin. Still, she showed some consistent lap times and had a perfect pitstop. The 23-year old birthday girl was really happy at the end of the race, as her co-driver drove solidly and finished 5rd in class.

Co-driver Jon Miller fought hard to catch up with the leaders up front, trying everything to make a move for a podium finish, but with the tires gone, he decided not to risk it. The Tan-Miller duo was happy to leave Sonoma with clean cars, a podium, a fast lap, and some good points. “But Road America will be a different story” said Miller, “and I’m looking forward to some cheese curds, Spotted Cow, and long straightaways.”

With a huge smile, Tan stated: “We finished ahead of the McLaren which was our goal for the championship points. Overall, it was a fabulous weekend and we’re looking forward to Road America”.

Nick Wittmer who also ran the first stint was really pleased with the outcome of the race. “We had an amazing start, fighting it out with the Championship leader in the McLaren. It was a beautiful race, no issues with the car. When Harry got into the car, he charged up to the front as much as he could, despite the worn-out tires. Near the end, McLaren bombed out, and Harry passed him and we gained mega points and we’re now back into the Championship lead.”

Wittmer’s driving partner, Harry Gottsacker added: “We came away with three podiums as a Team this weekend, and we’re happy with that. The Team worked really hard on our setup throughout the week, and they helped us to be able to fight for a podium. We thank them and the BMW guys who really pitched in. The Championship fight is on, and we’re up to the task. Can’t wait for Road America. It’s a home race for me.”

Both Wittmer and Gottsacker never give up the fight, gave stellar performances, and definitely earned that 3rd place finish.

After the race on Sunday, ST Racing Team held a “surprise birthday party” for Samantha who celebrated her 23rd trip around the sun. Happy Birthday Sam!

The next stop for ST Racing will be at Road America August 28-30.

The GT4 America championship utilizes GT4 homologated race cars in two popular race formats – Sprint and SprintX. The past season has seen explosive growth in the GT4 category and has resulted in a wide range of cars that are eligible to race in the GT4 America Series, including the BMW M4 GT4, Chevy Camaro GT4.R, Audi R8 LMS GT4, Ford Mustang GT4, and the Mercedes-AMG GT4. Among other GT4-spec cars are the successful Porsche Cayman GT4 CSMR, McLaren 570S GT4, Panoz Avezzano GT4, and many others.

GT4 America offers two regional series integrated within our SprintX Championship -West & East. Each regional series is designed to offer new drivers a localized race program that is cost effective and competitive, with all the benefits of racing in a professional national championship. Each region will consist of five (5) rounds at top-tier circuits in North America in a two-driver, Bronze-rated format.

With more than 25 years’ experience at the forefront of a continuously evolving industry, SRO Motorsports Group is the established international leader in GT racing. Best known for the development and implementation of the GT3 and GT4 regulations, SRO promotes and organises championships that embrace professional and amateur competitors. Its portfolio of highly regarded series spans Europe, America and Asia, while its flagship Intercontinental GT Challenge features events on five different continents.