ST Racing Starts the Season with Two Podiums at COTA

ST Racing Starts the Season with Two Podiums at COTA 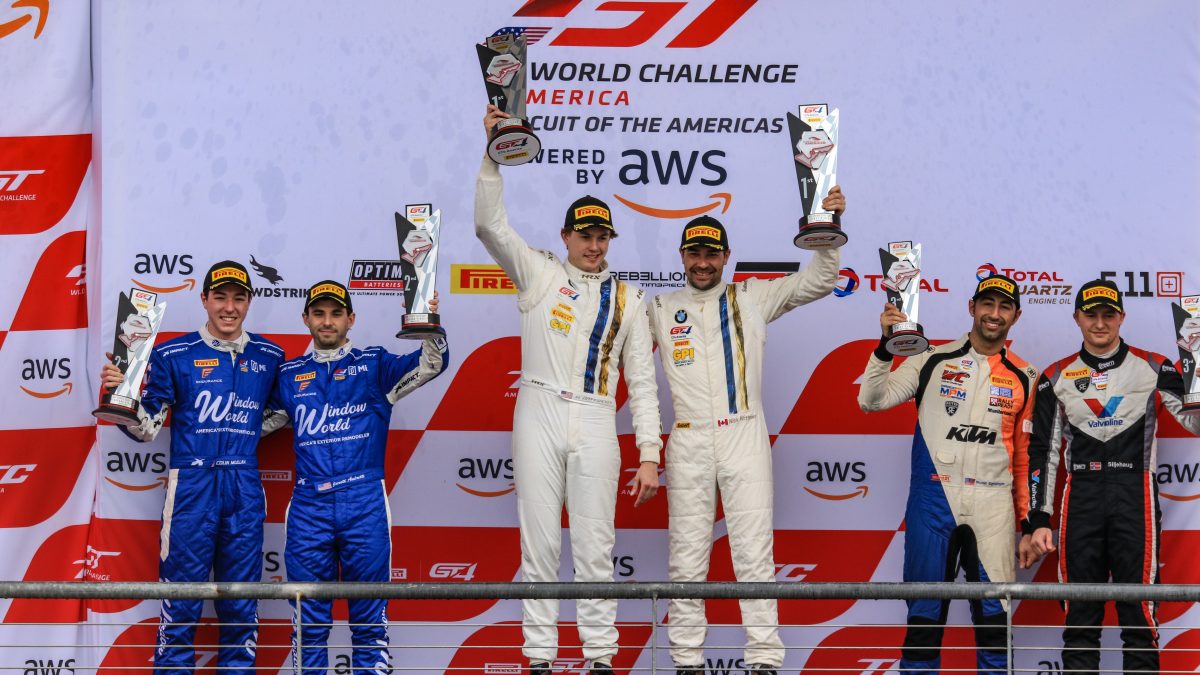 On the top step of the podium, young Texan Harry Gottsacker and Canadian Nick Wittmer were all smiles after scoring ST Racing’s first win of the Pirelli GT4 America SprintX Championship in Silver Class, on Sunday.

During Saturday’s first qualifying, Samantha Tan’s driving partner, Jon Miller qualified the #38 BMW M4 GT4 machine in 9th place overall, while Canadian driver Nick Wittmer put down two fastest laps of the session that should have given him and his co-driver Harry Gottsacker the pole for Race 1, but both fast laps were taken away due to track limit violations, relegating him to start in 26th place. Track limits seem to be an issue at COTA.

The green flag flew at 12:15 pm on Saturday under cloudy skies with temperatures in the high 60’s. Jon Miller wasted no time as he moved up 6 positions on the very first lap. At the same time, Nick Wittmer showed what he was made of when he passed 11 cars on that first lap despite the fact that his #28 BMW M4 GT4 was experiencing a lot of push and oversteer.

Both Miller and Wittmer were on fire and put on a spectacular show before handing the cars over to their respective co-drivers, Samantha Tan and Harry Gottsacker. When Harry took over, he struggled with the same mechanical issues, but drove solidly and still managed to bring the car home 3rd in class. Samantha Tan jumped into the car after Miller, and worked hard at managing her tires on the very technical 3.426-mile circuit finishing 4th in class. Not a bad start to the weekend.

After the race, Jon Miller couldn’t say enough about ST Racing. “It’s great to be back with this Team” he said. “This is my 3rd year with this Team. This kind of consistency with a team and a race program is a rare thing for any driver to have, so I am really thankful to be part of this organization. Today was great. When Nick Wittmer and I went out for qualifying earlier, we did some really fast laps, P1, P2, but some track limit violations were handed out, so we started the race a little further down than we wanted, but I knew our BMW’s were really quick, so I decided to just put my head down and charge right at the start to see how many positions I could get. And I came into the pits at half-time to hand over the car to “Sam” while we were in the lead which was really exciting. We had some great battles. Hats off to the competitors because it was hard clean racing at the front of the field. There’s a really diverse group of racers and cars out here, and tomorrow, we’re going to try and finish even higher than we did today.”

Teammate Samantha Tan had reserved comments about her race. “I battled with a lot of people out there. Jon (Miller) gave me the car at half-time, and I had a good stint, but I wish I had done a little better. I kept the car clean, and everybody respected my space, so it was a good race. I learned a lot but I will definitely try harder tomorrow and get that podium. We finished 4th in class today and brought the car home.”

Nick Wittmer was pumped and baffled when he got out of the car. “ST Racing did a great job setting up the car, but I think something happened in qualifying that no one knew about. When we got out onto the track for the warm-up lap, it felt like there was a loose toe arm in the back. Couldn’t do anything about it. When this happens, you have to drive what you have, put your head down and pick off everyone in front of you. I brought it up to 6th place, then gave the car to Harry (Gottsacker), and Harry did a great job even with the finished tires that I produced while driving with the broken link. And he managed to hold the 3rd podium spot despite this issue. This is a great start to the season.”

Showing mutual admiration for his teammate, Harry Gottsacker stated: “Unfortunately, with the mishaps we’d had in qualifying, we had to start at the very back of the pack for the first race of the season today. But it didn’t phase Nick (Wittmer) at all. He moved right up the field right away and fought tooth-an-nail to give me the car in 6th place (overall) and 3rd in class. When I jumped in, I fought as hard as I could. I had to work around a few problems. But, I know we’ve got a “weapon” (great car) here, so all we need to do is straighten out a few things, and we’ll be good for tomorrow.”

On Sunday morning, at 9:25 am, Samantha Tan and Harry Gottsacker started the race and were startled when the green flag was waved with only the first four rows lined up on the front straight. The rest of the 28-car field was still coming around the last corner at that moment and things got a little crazy with cars scrambling all over the track trying to catch up. On Lap 4, a short full-course yellow was brought out to clean some debris on track.

On the re-start, Tan nosed ahead, made a great pass on a McLaren, only to find out, three laps later, that she was penalized and had to let the McLaren by. It took at least 15 seconds for the McLaren to catch up. And she ended up passed him again soon after, but by then, she had lost many positions. A frustrating moment for the young driver, as she had put down some really good lap times. On Lap 11, Tan came into the pits for driver change and Jon Miller jumped into the #38 GPI-Biotech machine.

Meanwhile, Harry Gottsacker had tremendous speed during his stint, picking off the cars, one by one, and had moved up to 2nd in class when he handed the car over to teammate Nick Wittmer.

Both Wittmer and Miller were wickedly fast and bulldozed their way up through the pack, gaining positions with every lap. By the time the checker flew, Wittmer was running 3rd overall and 1st in class and Miller had made it all the way up to 4th in class.

Here’s what the drivers had to say about Race 2:

Samantha Tan (#38 BMW M4 GT4) “The race started off on a bad note. The start was just really disorganized. I really don’t think they should have given the green flag on that lap because half the field was

still going through the last corner when they gave the green, so that put me behind at the start. But, a few laps later, on a re-start, I had an awesome re-start. I was given the green early on the radio, so I passed the McLaren and got a 15-second gap on him, by the time I got the call on the radio to give the position back. I literally had to park it on the front straight to wait for the McLaren to pass me, and then I just passed him again on that same lap. If I’d been given that call right when I made the mistake, we would have had the chance for a podium. Jon did an incredible job. I ran my fastest time during this race. I’m proud of myself, proud of Jon, and I know we’ll do even better at our next race weekend.”

Jon Miller (#38 BMW M4 GT4) “The car was awesome today. It’s really one of the best race cars I’ve had since last year, here, at this same race. The results didn’t show it, but I was able to make passes, I was able to put the car where I wanted. We worked through a lot of adversity this weekend to find a package that worked and eventually we got there, and today, it paid off for Sam too. She was turning some really great laps during her stint. Unfortunately, we didn’t have a great starting position, so we were stuck in the pack and only had one short yellow at the beginning of the race, so it was a long day trying to work through traffic from the back, but two 4th place finishes in class for us this weekend, good championship points. We’ll be on the podium pretty soon, I’m confident of it. I’m thrilled for our teammates (Nick and Harry) who won today, and I just know that Sam and I are going to be up on the box with them pretty soon.”

Harry Gottsacker (#28 BMW M4 GT4) “Definitely a great day! Nick drove the wheels off the car to finish the race. I was able to have a pretty good start. Pumpelly, Cooper, Andretti and I were pretty much nose-to-tail the whole entire first half of the race. I was able to manage the tires and give Nick a really good race car, and he just went to the front immediately. It was a great day. I want to thank everyone at ST Racing. The guys kicked butt in the pit stops and everything was just perfect today.”

Nick Wittmer (#28 BMW M4 GT4) “A big thank you to ST Racing who helped me get the podium today, because without them, I wouldn’t have gotten the win with Harry. Harry did such a great job getting it done and he gave me an excellent car to finish the race. Thanks to Harry and the guys on the Team, we got the win.”

Again, ST Racing enjoyed the presence and assistance of two top technicians from the BMW Race Crew Program throughout the weekend. The Team was really grateful for their precious help and thanks BMW North America for this great collaboration.

The next stop for ST Racing will be at Long Beach for the GPLB April 17-19.