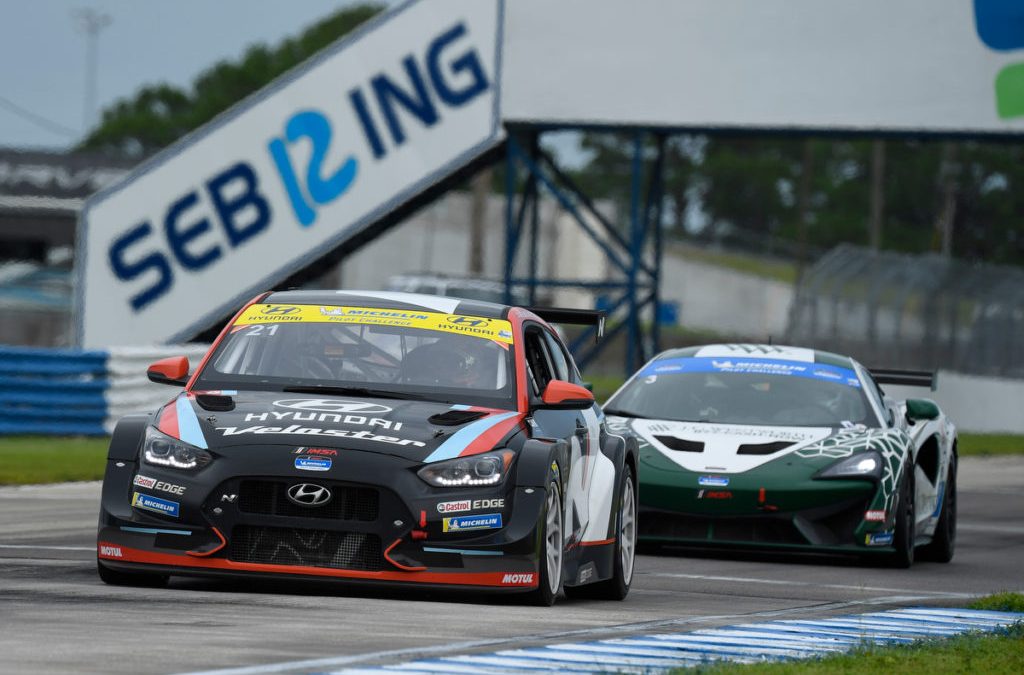 The BHA cars opened the event on top, and remained there throughout. Taking the green flag from the front row, Harry Gottsacker (#21) had a great start and dueled polesitter Ryan Norman (#33) Veloster for the lead in the opening laps.

Fifteen minutes into the two-hour race, lightning electrified the dark skies of Sebring, bringing out the red flags and pausing competition. Drivers were forced to patiently wait out the conditions from the pit lane. After 174 days on pause, another hour just intensified their pursuit for victory.

With an hour to go, the race re-started, and pit stops commenced shortly after. Mark Wilkins took the reins of the #21 Hyundai and although challenging, intermittent conditions continued, Wilkins was unstoppable. New co-drivers for 2020, Wilkins and Gottsacker earned the team’s first win of the season. Mason Filippi and Michael Lewis raced to second in the #98, securing the team’s first 1-2 finish in IMSA. BHA Customer Support Team, Forty7 Motorsports finished third in the #47 Hyundai Veloster N TCR, making it an all Hyundai podium for the first time in IMSA history.

Ryan Norman and Gabby Chaves made their second IMPC start in the #33 Hyundai Veloster N TCR at Sebring. Like their debut at Daytona, they set the pace. The duo topped the charts in every session, and Norman earned his first IMSA pole position. They looked to have a comfortable race lead before their first pit stop when they lost over a minute in the pits due to a jammed seatbelt. Chaves took the wheel and quickly set the fastest race lap, and then beat his time lap after lap, the #33 Hyundai Veloster TCR finished 7th.

BHA welcomed Parker Chase and Spencer Brockman to the team in early July. Co-driving the #29 Vertical Bridge Hyundai Veloster N TCR, the duo quickly acquainted themselves with the Veloster and IMPC competition. They opened the event strong, and started fifth based on Brockman’s impressive qualifying effort. Brockman passed for fourth and ran comfortably inside the top five before contact with a GS competitor pushed him off track. He was able to resume but the right rear tire was damaged. Out of contention, Parker took over driving duties for the second half and was able to use the track time to familiarize and test the car to prepare for the next event.

Road America is the site of Round 3 of the 2020 IMSA Michelin Pilot Challenge. Located in Elkhart Lake, WI the event takes place July 31st – August 2nd.

Race Winners: #21 Hyundai Veloster N TCR
Drivers: Harry Gottsacker and Mark Wilkins
Qualified: 2nd (Gottsacker)  Finished: 1st
First victory for Wilkins and Gottsacker as co-drivers.
Harry Gottsacker: “It feels awesome to get my second win in IMSA Michelin Pilot Challenge and my first with Mark as my teammate. I’m looking forward to getting more trophies with him this season! The BHA team had a really good car for us at Sebring, which is a tough, bumpy track to set up for. I knew if I got a good start and managed the traffic, we would be in the hunt. The weather threw a few curveballs, but it couldn’t stop the Hyundai’s!”
Mark Wilkins: “Hyundai 1-2-3, what a great way to kick off the season, and perfect result to build on the manufacturers championship for Hyundai. Harry did a fantastic job on the starts and held a healthy margin up front. Our Veloster N TCR was on rails and I can’t thank the team enough, especially with all of the new faces since our expansion and their incredible efforts.”
Share
0