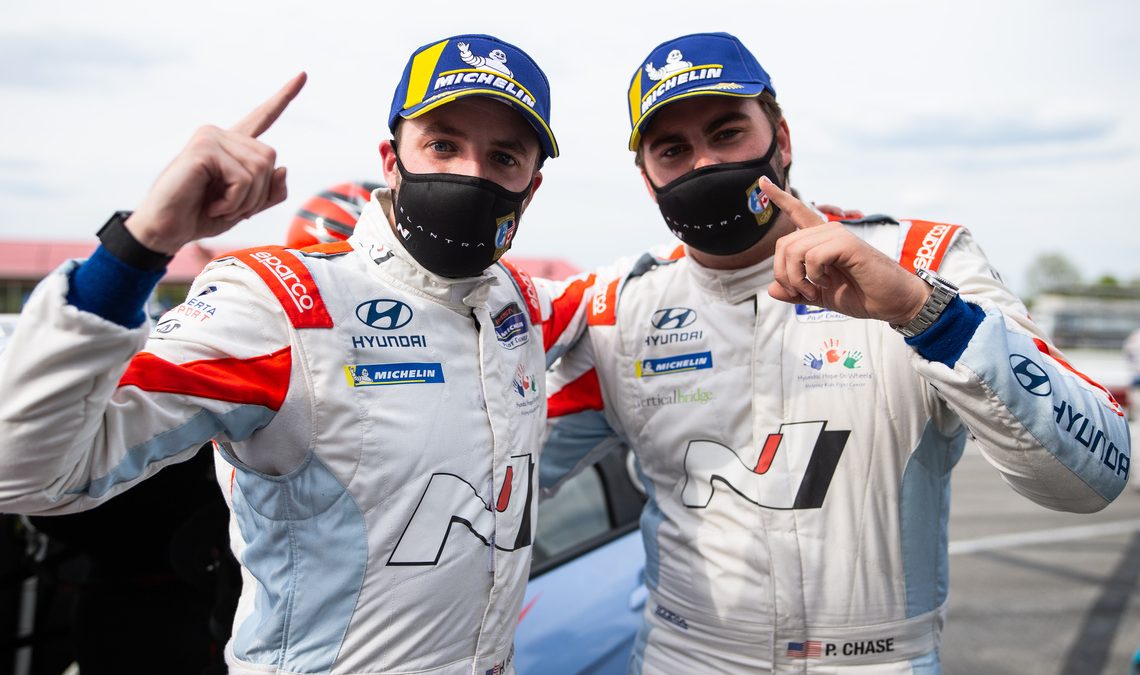 Hyundai’s newest race car, the Elantra N TCR scored its first IMSA victory, just three races into the 2021 season at Mid-Ohio. It also was the first win of the season for Bryan Herta Autosport (BHA) w/Curb Agajanian and Hyundai. The Elantra N TCR is the racing version of the 2021 North American Car of the Year, the Hyundai Elantra.

The #98 Elantra N TCR started third with Parker Chase behind the wheel. Racing for his first TCR victory, Chase passed for second on the start and challenged the No. 19 Van der Steur Racing Hyundai Veloster for the first half of the race, battling for the lead on several occasions. Chase made the pass just before the full-course caution halfway through the two-hour race on the rolling hills of Mid-Ohio Sports Car Course.

“It was a blast out there chasing that Veloster for the lead. It’s great to get the first Elantra win for Hyundai Motor America and Bryan Herta Autosport,” said Chase. “I had a good rookie season last year with a lot of podiums in the Veloster, but it really feels good to get the win, and I think there will be more with this Elantra N TCR, it is a great race car.”

The #98 crew took advantage of the mid-race caution to service the Elantra with four tires, fuel and to execute the mandatory driver change. Ryan Norman, a native of Aurora, Ohio and the 2020 IMPC Champion took the reins and rejoined the race in second behind the #27 Hyundai Veloster of Copeland Motorsports.

With his sights set on the lead and his rearview mirror full of teammate Michael Lewis in the #77, Norman found himself in the middle of a Veloster sandwich racing for his first victory of the season. He masterfully preserved his Michelin tires to take advantage of any opportunity to pass for the race lead.
It came on lap 56 with just over 30 minutes remaining, when Norman passed the #27 Veloster of Tyler Maxson. “It’s an awesome feeling to win here at home in Ohio, and to win with this new race car. Everyone at BHA and Hyundai have used these long breaks between races to learn and to develop this Elantra N race car. This win is proof, hard work pays off.”

Norman held off teammate and championship points leader Michael Lewis in the No. 77 BHA Hyundai Veloster by 1.020 seconds at the finish line. Lewis took over from Taylor Hagler at the first pit-stop and finished second, their third consecutive top-five finish this season. Lewis and Hagler cushioned their series lead by 20 points.
Hyundai’s swept four of the top five positions at Mid-Ohio. The No. 27 Copeland entry was fourth followed by the No. 33 BHA Elantra N TCR. Coincidently, Mid-Ohio was the track where BHA and Hyundai took their first victory with the Veloster two years ago.

The 2021 IMSA schedule returns to competition with a 4-hour endurance challenge at Watkins Glen International on Saturday, June 26th for The Tioga Downs Casino Resort 240.

Ryan Norman: “It feels really good to get a win with the Elantra and one for the team. It was really challenging race at the end. I didn’t realize it was actually the restart, I thought it was a long yellow and I had stone cold tires. It was tough keeping Michael (Lewis) behind me. The car was great, huge accomplishment by Hyundai and BHA.”

Parker Chase: “I started in 3rd and made it to 2nd by the second lap. Harry (Gottsacker) and I had a lot of great battles throughout the first stint, good, hard, clean racing. I worked hard to save tires and it was great to hand the car over to Ryan in the lead.”