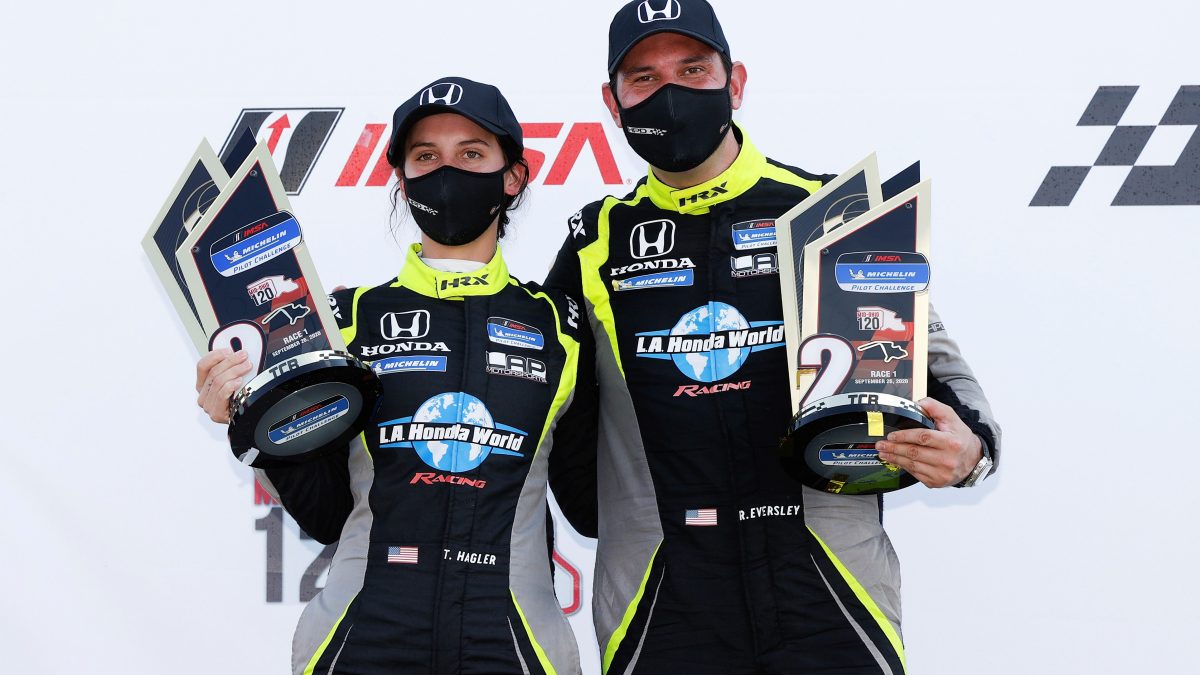 Taylor Hagler and Ryan Eversley brought home a second place finish for L.A. Honda World Racing at Mid-Ohio Sports Car Course on Saturday – the first podium of the season for the pair.

The second place finish was a strong start to the double-header race weekend at Honda’s home track.

Saturday at Mid-Ohio staged a big day of on track action for Hagler and the No. 77 L.A. Honda World Racing team, with two qualifying sessions and Race One all on Saturday.

Hagler and the L.A. Honda World Racing team got off to a fast start of the race weekend as Hagler prepped for her competition debut at Mid-Ohio Sports Car Course. Closing out the first two practice sessions fifth and second, Hagler was primed for a strong qualifying run on Saturday.

The Honda development driver continued to show her improvement behind the wheel of the Honda Civic Type R TCR as she went on to post her best qualifying result of the season. Hagler  placed her Civic fifth on the grid after posting a 1:32.820-second single lap flyer for Race One one on Saturday afternoon.

As the green flag flew for Race One, Hagler got a quick jump on the start, advancing two positions forward to settle into third.

“Ryan and I spent a lot of time talking about the start and how I can make the most of it,” said Hagler. “We went through techniques of making sure I watch the guys ahead to anticipate the start but also not getting caught up in the stop-and-go. With that help I was really able to get the jump on the start and make up some positions.”

Managing her pace, Hagler opened up a 1.3-second gap to the hefty train of six cars behind. Despite the draft advantage that those competitors had, Hagler still managed to maintain the gap and hold onto third.

The first full course caution on lap 14 brought Hagler into pit lane for a fuel-only stop and back out into the fray fifth for the restart. The longer Hagler stayed on track, the quicker she got. On Lap 25, Hagler posted her personal fastest lap time – 1.31.944-seconds – which was nearly a second faster then her qualifying time.

In an intense six car battle for the majority of her stint, Hagler drove a heads up race to hand over the Civic to teammate Eversley on Lap 37, with just under an hour remaining.

After the second yellow was deployed on lap 41, Eversley was set to restart from third. Capitalizing on a fresh set of Michelin tires and a strong record of success at the track, Eversley made the jump into second where he fought for the lead for the proceeding laps.

Eversley built a comfortable two second gap between he and the third place running car, leaving the Honda driver to focus forward to the finish. Crossing the line second, together, Eversley and Hagler captured the team’s first podium finish of the season and laid solid ground heading into the second round of qualifying later on Saturday evening.

“Taylor did an awesome job today,” said Eversley. “There were a couple of incidents on track that Taylor was able to avoid and they were incidents that not a lot of Rookies would have been able to get around, she just did a really great job.

“It was after the second practice session that we realized we had a pretty fast race car so we knew we had a good shot at a strong result,” continued Eversley. “But, with the way that our season has gone, luck hasn’t been on our side. After Taylor’s opening stint and my second stint, I knew we were in a really good position to get a podium. Now we’re just hoping to replicate that for tomorrow’s race.”

The second place finish marks Hagler’s first IMSA podium. With one more qualifying run and Race Two still to come, Hagler is hoping to use that momentum to spray more champagne on the podium come Sunday.

“It feels great to get my first IMSA podium,” said Hagler. “The beginning of the race definitely wasn’t easy. I was running by myself for a while, so I made sure to use the pack of cars behind me as a reference. I could tell that they were slower than me in certain corners, so I made sure that I hit all my marks to gap them. The car was running great and Ryan did what he does best to bring the No. 77 Honda Civic home second. It’s a quick turnaround to our second qualifying session later tonight. I’m not changing my focus too much, because every time I’m out on track I try to learn new things and improve my time. We’ll give it another shot tonight and hopefully have another strong race tomorrow.”  Race Two of the weekend will kick off on Sunday at 10:35am ET. Live broadcast coverage will be on TRACKPASS by NBC Sports Gold.